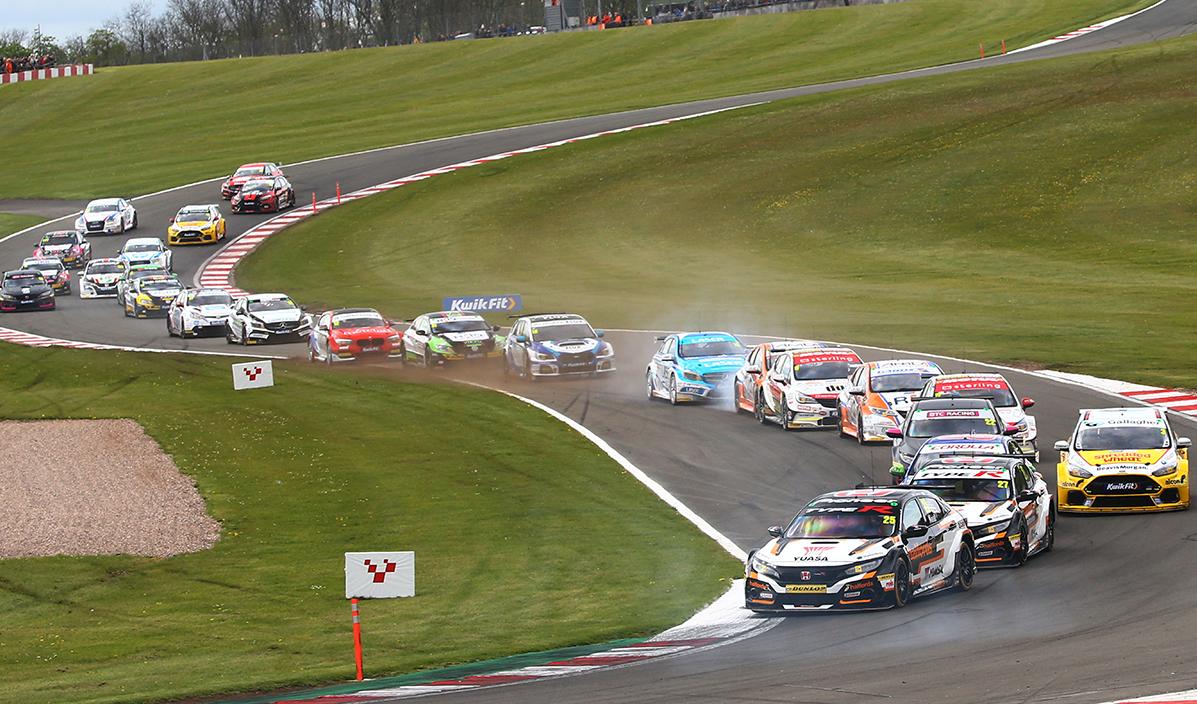 Honda extended its position at the head of the British Touring Car Championship manufacturer points table following the second meeting of the season at Donington Park, after Matt Neal scored the Halfords Yuasa Racing team's first podium finish of 2019 in race two.

For the second meeting in succession a rain-afflicted qualifying session and resultant red flag stoppages prevented either driver making the most of their pace in their Honda Civic Type R race cars, and team-mates Dan Cammish and Matt Neal ended up sharing the fourth row of the grid in seventh and eighth places.

Race one proved a carnage-filled affair interrupted by two safety-car periods. Restarting from the first one, an opportunistic Neal made the most of a frantic six-car battle to not only overtake his team-mate but also four other cars.

Thereafter the two Halfords Yuasa Racing Hondas circulated with the rival Toyota of Tom Ingram sandwiched between them, Neal and Cammish finishing fourth and sixth to guarantee promising grid spots for race two.

Both Hondas made strong starts to the second race with Cammish rounding the Toyota of Ingram to slot into fifth behind his team-mate. But unfortunately his progress was then arrested by a drive-through penalty for an adjudged out-of-position start. This dropped him to the back of the field from which he fought back to a 13th place finish.

Neal, meanwhile, closed on the leaders, passing the BMW of Tom Oliphant and then the Subaru of Ashley Sutton with a brave manoeuvre around the outside of the first corner. The Honda crossed the finish line in second place to earn a delighted Neal the team's first podium of 2019 and to extend Honda's lead in the manufacturers' championship.

The reverse grid draw for race three placed Neal in ninth spot on the grid, and with both he and 13th-placed Cammish starting on the harder-compound option tyre mandatory for one race of the meeting their task would not be easy.

Neal's situation was made worse when he was severely delayed at the start, slipping back to an eventual 18th-place finish. Cammish, however, fought hard in the very evenly matched midfield pack, forcing his way into the top 10. his efforts ensured that Honda takes an extended lead in the manufacturers championship to the next meeting at Thruxton, Hampshire on 19th May.

Matt Neal - Halfords Yuasa Racing driver and Team Dynamics Director
"It was a really positive day, especially with the first podium of the season for myself and the team in race two, but it turned into a struggle in race three due to the disparity between the standard and the harder option tyre here. So I was determined to bring the car home in one piece and score some vital manufacturer points to take to the next round at Thruxton."

Dan Cammish - Halfords Yuasa Racing driver
"Another frustrating day for me in which I had plenty of speed but not the luck. I was pleased with my strong finish in race one but the penalty in race two made it very hard to get anything more from the day. I fought hard to get into the top 10 in the final race and score some vital points.
Now it's all about looking forward to the next meeting at Thruxton – the Civic Type R has always been strong at the track and I was fastest in the recent test session there, so I'm optimistic."