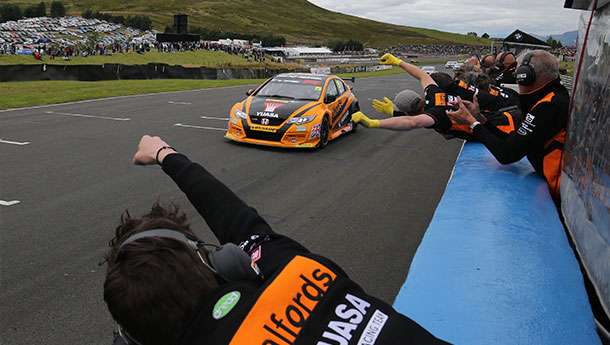 Matt Neal tallied his third victory of the 2016 Dunlop MSA British Touring Car Championship campaign at Knockhill this weekend (13/14 August) as the three-time champion maintained his bid for a fourth tin-top crown north of the border.

An impressive qualifying effort with 57kg of success ballast on-board his Halfords Yuasa Racing Honda Civic Type R saw Neal line up seventh on the grid for the opener, with team-mate and home hero Gordon Shedden just a tenth-of-a-second back in 11th after suffering turbo trouble.

From there, the duo raced in tandem to eighth and ninth on the harder-compound Dunlop tyres. Having switched to the more favourable softer rubber for race two, Neal went on a charge, scything his way through the field and taking advantage of the leaders' scrapping to move up to third on lap 22, second two laps later and snatch the lead at the hairpin a lap later still, subsequently easing clear to secure his third triumph of the season.

After crossing the line a solid ninth in race two, it was Shedden's turn to bolt on the soft tyres in the day's finale, swiftly advancing five spots to run fourth before setting off in pursuit of the leaders. Although he soon caught them, there was no way past around the tight-and-twisty Fife circuit, but the Scot did snare an additional point for posting the race's fastest lap.

On maximum ballast following his earlier race win, Neal completed an excellent weekend with a strong fifth place, consolidating his second spot in the Drivers' standings - just nine points adrift of the lead - with Shedden similarly well in touch in fourth. Honda maintained second position in the Manufacturers' classification, with Halfords Yuasa Racing continuing to narrow the gap to the top of the Teams' table.

Matt Neal:
"Both of us took the pain on the hard tyres in the first race, but I really enjoyed race two; being on the soft tyres, I thought we would have a chance from where we were starting and after catching the leaders, I could see they were beginning to struggle a bit and I was able to capitalise upon their battle. The Halfords Yuasa Racing Civic Type R was monstrous right the way to the end. With 75kg of ballast in the car in race three, I honestly thought a top ten finish would be a good outcome so I was really pleased to take fifth. We came to Knockhill anticipating a tough weekend with the weight we were carrying and its reputation as a rear wheel-drive circuit, so to leave with a win and still sitting second in the championship is fantastic"